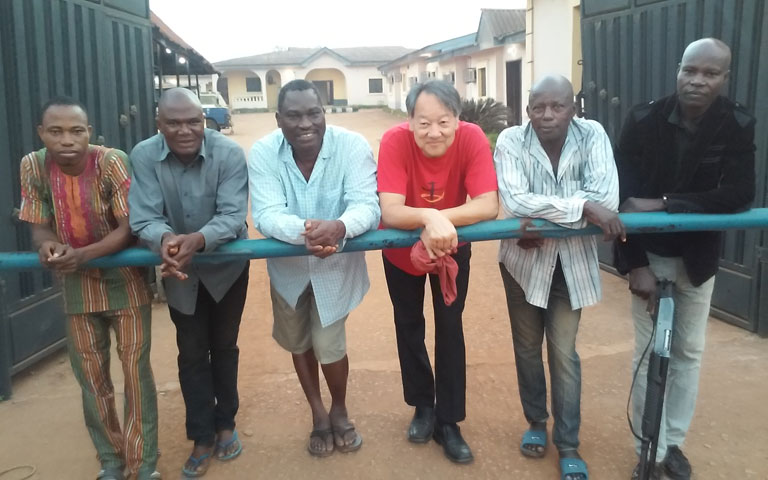 In our week long stay in Lagos, our team was restricted to the University Hotel of Tai Solarin and we had 8 revolving security personnel guarding the walled facilities. We also had 2 local policemen joining the team — they traveled with us in the van and to our lecture halls. The US government sent out this email warning:

The Department of State warns U.S. citizens of the risks of travel to Nigeria and recommends that U.S. citizens avoid all but essential travel to Adamawa, Bauchi, Borno, Gombe, Kano, Jigawa, and Yobe states because the security situation in northeast Nigeria remains fluid and unpredictable.  Very poor transportation infrastructure also makes it difficult for the U.S. Mission to provide consular services in these states.  All U.S. citizens should have evacuation plans that do not solely rely on U.S. government assistance.  Due to the risk of kidnappings, robberies, and other armed attacks, U.S. citizens should also avoid all but essential travel to: Bayelsa, Delta, Kaduna, Katsina, Plateau, Rivers, Sokoto, and Zamfara states.  This replaces the Travel Warning dated April 5, 2017.

Boko Haram, an extremist group based in the northeast, has targeted churches, schools, mosques, government installations, educational institutions, and entertainment venues in Adamawa, Bauchi, Borno, Gombe, Kaduna, Kano, Plateau, Taraba, the Federal Capital Territory, and Yobe states.  Hundreds of thousands of Nigerians have been displaced as a result of violence in the north.  Islamic State West Africa, which is now a distinct group from Boko Haram, is present in Nigeria, and may seek to attack locations frequented by westerners including major population centers.

U.S. citizens should be vigilant at public gatherings and locations frequented by foreigners.  Markets, hotels, restaurants, bars, and places of worship may become targets for terrorist attacks.  Exercise extreme caution throughout the country due to the threat of indiscriminate violence.

Travel to the Gulf of Guinea should also be avoided because of the threat of piracy.

U.S. Mission personnel are subject to restrictions when traveling in Nigeria, with the exception of local areas of Abuja and Lagos, and may be subject to other constraints as security conditions warrant.

So it was no surprise that I got to meet all of the guards. They became good friends and I drew many of them.

Even though our official mission was to teach entrepreneurship to the school, my personal mission was to teach the people in our camp. I taught Stephen and Clement how to make bamboo kites so they could sell it and maybe even start a kite tournament. I advised Anthony to start a motorbike supply store. I paired Kenny. a designer, and “Jumper” to start a clothing business … I even introduced them to a local T-shirt distributor. Ola was interested in bamboo furniture and I drew him sketches on how to make them.

Ade, our driver, also wanted to get into the act and so I gave him catalogs of different flooring materials and inspired him to get hold of sources of different material. I told him to practice/start with his friends and neighbors but ultimately his target should be the business establishments who could afford these luxurious designs.

Am I being to ambitious? Am I expecting too much? Only time will tell. What I do know is that when people are at the bottom of the economic ladder, there’s no other way but up.